To start, what motivates me? Constantine recently posed me the question: What new skills I would be willing to learn on my own time and apply towards Athens’ Own? I came up with a brief list of things I am most interested in and that I feel I would willingly, almost unconsciously, want to learn in my free time which could be relevant to my work with Athens’ Own. The question was posed this way to help me draw out those types of skills and concepts which would be most motivating to me.

From here, we looked at which of those things best aligns with what Athens’ Own is working on. If both my “to-do” list and Athens’ Own’s “to-do” list have similar items on them, then that is the best place to start. The main idea behind this practice is that progress will be made faster when there is alignment of needs, interests, etc. If I can work on something I enjoy that helps move our team, our systems, and our actions forward, it is going to be more productive and positive than if I am being coerced into doing something I don’t think is relevant. This is also why we ask our interns to write their holisticgoals. We can take notice of where a certain person’s goals line up with ours, and then work together to move both them and us towards those goals.

We are working on further developing our educational strategy by exploring this idea of motivation and trying to meld educational theories with our everyday business practices. We hope to provide an experiential learning environment for all of our interns and volunteers. By discovering what motivates ourselves and our team members, we can work to find the best and most exciting opportunities for “working” and “learning” to become one and the same. 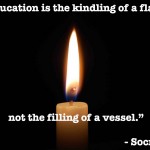 In June 2012, I sat down with Constantine to discuss a potential job opportunity. He was looking for someone to help tell the story of his company. We talked for hours that day, over several cups of Dawn Chorus Coffee. He asked if I thought in two weeks, I could write the whole story of Athens’ Own. I said of course! Two weeks, that’s plenty of time to write about a business. Why would I have thought that with all my organizational, educational, and personal experiences, it wouldn’t be a breeze?

Almost an entire year later, here I am, with still only the beginnings of the story in my head. I am not saying that I slacked off for a year, I am saying that I never imagined the complexity of the Athens’ Own story could be more than a “This is who we are, this is what we do”. It has taken me almost a year to realize that not only did I not know anything then, I only know bits and pieces now.

I still don’t think I was naive in assuming I could write the story of a business in two weeks. I’m sure there are plenty of businesses out there who can easily sum up who they are and what they do in a few fairly simple paragraphs. However, in the case of Athens’ Own, I found that the story is as much about my own journey as it is Constantine’s. Had I arrived at that first day and said there was no way I could ever learn it all in two weeks, I might have reached this conclusion sooner. In fact, looking back, what I should have said was: “I HOPE I can’t learn the story in two weeks. If I could, it can’t be that impressive of a story.”

In each day that followed, I have observed, participated, helped, asked questions, heard stories, looked things up, wrote bits and pieces, and learned a bit more. Perhaps the most challenging part of this experience was that for each bit I learned, ten more bits emerged that I didn’t yet understand. For a person like me who likes things quantified, I have been exasperated more than once with the seemingly endlessness of the journey. However, I have continually held onto the driving and motivating hope that one day I can somehow get it all down in a way that someone else can read. Each piece that I construct brings me a sense of satisfaction that one more piece of the puzzle is in place, even if that puzzle keeps getting bigger every day.

But the point I would like to make from all this is that the old proverb that “It’s not the destination, it’s the journey” is the truest statement I could ever make about my time at Athens’ Own. Although I originally thought my learning experience would have a definitive end and I would move from the learner to the teacher, I have discovered that there is no clear destination, and that is indeed the entire point. I am here to learn, and to continue learning. Even more importantly, I am here to seek out the knowledge and experience, in order to make this challenging journey last as long as possible, beyond Athens’ Own, beyond a job, and beyond anything I can imagine. I have learned, simply, that I have a lot to learn.