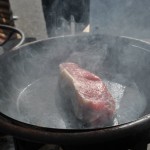 On a sunny Saturday morning in Carlisle, PA, as the church bells were chiming their last note, a little boy named Constantine Faller clung to his mothers’ arm as they walked down the street to the local butcher shop. This was the routine every Saturday morning; Mass, then a stroll down the street to order lunch from a nearby restaurant, and on to the butcher shop to pick up an order of meat to feed the family for the coming week. From those early days, when little Connie had to stand on his tip-toes to see over the top of the butcher block, to when he was old enough to walk down and pick up the family’s order by himself, he learned to understand and appreciate what true local quality meat was and what it meant.

A few years (and a few more younger siblings) down the line, a new local meat processing plant opened up in Carlisle. By now there were eight Faller kids. Every penny had to go as far as it could, and Constantine’s mother made the frugal decision to purchase meat at this new plant, instead of the small butcher shop. As a young adult, Constantine had little to no interest in where or why his mother bought groceries, but for some reason, his mother’s decision greatly upset his grandmother. Constantine realized that there was something clearly different about this new store and its beef, and his Grandmother was not happy about it. He soon discovered that particular something had a bit to do with texture and a lot to do with flavor.

Around this time, and even a bit earlier, a new practice of wet aging was becoming common in the commercial beef market. Most commercially available beef was no longer aged by hanging. Instead, to save money and time, beef was being hung for less than a week, then vacuum sealed in plastic packaging, boxed, and put on a warehouse shelf. Although the beef can still age in these sealed packages, the taste which results from wet aging is not at all similar to the rich, naturally flavorful taste gained from the traditional dry aging process. Unfortunately, this type of hanging (which was the method used in that little butcher shop Constantine used to go to,) takes time, effort, and energy. Wet aged beef can be boxed and neatly stored on shelves, as compared to the inconvenience of a room filled with whole, hanging carcasses. Even though it has a far superior flavor, very little beef is dry aged today. Because of this, the commercial beef industry made the decision to switch to wet aging.

Throughout his life, Constantine has never forgotten the little butcher shop and the superb taste of dry aged beef. Around 1995, after moving to Athens, Ohio, Constantine began experimenting with dry aging single cuts of beef. Unfortunately for a man who loves learning new things, there was no one around who could teach him this technique. It seemed like everyone he talked to about it had a story from their own childhood about helping their grandfather age beef in their barn, and running out to cut off a bit for breakfast in the morning, but it seemed the actual knowledge of the aging techniques died with those grandfathers. Never discouraged, Constantine attended beef production classes and workshops, conducted his own research, and experimented with his own processes and ideas, in diligent and passionate pursuit of that perfect steak.

Through his research, he discovered many unsettling trends in the beef industry. One of these was the practice of electrocuting entire beef carcasses to burn off the protein, and to accelerate the aging process, and Constantine found the sight of it horrifying. Witnessing this practice in particular drove him to decide to create a product which would uphold the absolute highest standards of not only taste, but also honor and respect, even after the animal is dead.

While experimenting with his own dry aging techniques, Constantine spent a good bit of time trying to find a meat processor to work with who would dry age his beef long enough. Most processors were willing to hang beef for no more than ten days. Constantine needed to find a local processor who would prepare the beef to his particular specifications. He searched high and low, made countless phone calls and visits, until he finally found Dick’s Meat Packing Plant, in New Lexington. Having already made connections with local beef farmers at the nearby Red Bird Ranch, he began to develop these two partnerships to make his dry aged beef a reality. Constantine knew that beef is generally a product that people are willing to pay a premium for. He also knew that bringing a truly exceptional local beef product to an already strong local economy would be one way to begin work to get the farmers a fair wage. Constantine was eager to establish a system which would explore ways to provide sustainable economic development for everyone involved.

Around this time, Constantine was already beginning to sell coffee in a few local stores. The coffee as a product was relatively easy to bring to the market. Using the cooperative relationships he had already begun to create with these local businesses, he was able to begin selling his own dry aged beef. Constantine’s first commercial sale of his beef was in April of 2005, to the Wild Horse Cafe in Pomeroy, Ohio. Since then, he has created collaborative partnerships with many Athens county businesses to distribute and sell his dry aged beef, including Jackie O’s Pub and Brewery, which today serves a burger he created, (called the “Athens’ Own Burger”), made with Constantine’s dry aged ground beef patties. Retail offering includes Poston’s Carry out in Stewart and Seaman’s Grocery in Athens.

Throughout the story of this beef, Constantine has never had anything more than word of mouth to know he was doing a good job. He never entered any contests, or pursued any national recognition. He just knew he liked the beef, and hoped other people would like it too, which turns out to be exactly what happened. By word-of-mouth, Athens’ Own dry aged beef has been compared to beef available in the finest New York steak houses, and has been hailed by many local chefs as a truly exceptional product. Even so, Constantine is still working to continuously learn more and refine his methods. He still experiments with aging methods, temperatures, grain, and genetics. He hopes to never be entirely finished crafting and perfecting the quintessential delicious steak. For Constantine, Athens’ Own dry aged beef is truly a life-long labor of love.

One Response to “The History of Athens’ Own Dry Aged Beef”